The Economist 05.08.2011 Silvio Berlusconi appears to have no response to Italy

Italy and the euro 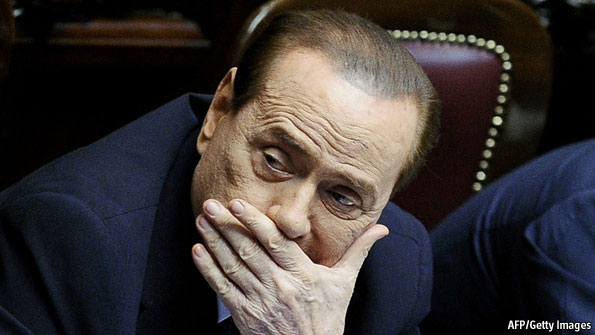 HOWEVER bad the economic crisis in southern Europe may be for investors, it is proving lethal for the area’s political leaders. In March José Sócrates, Portugal’s beleaguered prime minister, resigned. Soon afterwards his Spanish counterpart, José Luis Rodríguez Zapatero, announced his intention to step down. In June George Papandreou, Greece’s prime minister, came close to ejection during a fierce debate over an austerity package. So as he stood up to make the first of two eagerly awaited speeches to parliament on August 3rd, Italy’s prime minister, Silvio Berlusconi, may have had an uneasy feeling he was one in a line of dominoes. If so, there was nothing in the style or content of his address to suggest it. Nor was there much to indicate that he appreciated the magnitude of the crisis facing the euro or the case for drastic action to tackle it.

Many analysts argue that the euro’s difficulties are beyond resolution by any one member. But Italy is crucial. It is the biggest country on the euro zone’s troubled southern flank, and its €1.8 trillion ($2.6 trillion) borrowings dwarf those of any other country in the single currency. Mr Berlusconi’s lacklustre, almost blithe speech looked like a missed opportunity to influence the course of events.

He was speaking after the Milan bourse had fallen for four straight days and Italy’s borrowing costs had reached euro-era records. Hours before Mr Berlusconi’s address, the yield on Italy’s benchmark ten-year treasury bonds hit 6.25%, before slipping back fractionally. Giulio Tremonti, the finance minister, was summoned to Luxembourg for an emergency meeting with Jean-Claude Juncker, head of the euro group of finance ministers. Not that Italy was alone. The day before, Spain’s borrowing rates too had hit record highs (see article). Both Italy and Spain face the threat of a self-fulfilling fear in the markets that they are fated to suffer a Greek-style financial emergency. A special euro-zone summit last month briefly calmed investors’ nerves after Italy had been first contaminated by the spreading crisis. But doubts have persisted as to the effectiveness of a €48 billion package of budget-reduction measures rushed through the Italian parliament in mid-July. A renewed bout of concern over the two biggest southern euro-states began gathering momentum on July 29th, when Moody’s, a ratings agency, warned that it might downgrade Spanish debt. The yield on Spain’s bonds started to climb, tracked closely by the return on Italian debt. Both countries’ borrowing costs have edged close to the 7% mark that heralded bail-outs for Greece, Ireland and Portugal. But even if Spain could—just—be handled, Italy is almost certainly too big to be rescued, and its presence on the international debt markets is daunting. Even though an unusually high proportion of Italy’s treasury bonds and bills are in the hands of Italians, foreigners still hold around €700 billion-worth of the things. With alarm rising, José Manuel Barroso, head of the European Commission, issued a statement urging national leaders to get a grip. But Italy’s billionaire prime minister was content to tell his fellow deputies: “You are listening to an entrepreneur who has three companies on the stock exchange and who is therefore on the financial battlefield, aware every day of what happens in the markets.” Investors were making a big mistake, he hinted: Italy’s economic fundamentals were healthy; its banks were sound (and their shares undervalued, he added). Mr Berlusconi neither promised to stiffen the austerity package approved last month, nor to bring forward unpopular measures that will otherwise be left to the next government to apply. His most radical proposal was for an overhaul of labour law (if the unions and employers can be persuaded to agree). Although investors clearly fear the spreading of market contagion, they also have concerns over political stability. During his address to parliament Mr Berlusconi again vowed to remain in office until 2013. Yet there is ample evidence that he is part of the problem. The same can now be said of Mr Tremonti, whose emphasis on fiscal rigour was until recently seen by investors as crucial to any solution. The finance minister remains vulnerable to a scandal involving a former adviser accused of influence-trafficking. Marco Milanese, who is also a deputy, made available to his boss a flat in one of the most fashionable parts of central Rome. Mr Tremonti claims to have paid him rent, but in cash—an awkward explanation for the man charged with ensuring that Italians pay their taxes. More important is Mr Berlusconi’s own vulnerability, which is increasing as supporters begin to fret over his waning popularity. His credibility is shrinking: the July austerity package was long on tax increases he had often promised to eschew. And he seems apathetic: before his appearance in parliament this week he had said next to nothing about Italy’s financial crisis in nearly a month. Mr Berlusconi’s main ally, Umberto Bossi of the Northern League, whose votes keep the prime minister in power, was noticeably absent from the chamber during his speech. One of Mr Bossi’s most senior lieutenants, Roberto Maroni, the interior minister, was there. But, intriguingly, he chose to sit among his party colleagues, and not with the rest of the cabinet.