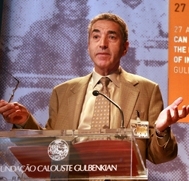 [media-credit name="Mustapha Tlili" align="alignleft" width="189"][/media-credit]Mediterranean countries are experiencing turbulence unseen since the era of decolonization and independence. Popular revolutions in Tunisia and Egypt have swept away entrenched autocracies. Libya’s Muammar el-Qaddafi is holding on by the skin of his teeth, and political leaders in Algeria and Morocco are scrambling to maintain authority.
Can a Mediterranean space nurtured by shared democratic values, interests, and hopes emerge from this maelstrom? The Mediterranean countries are home to 475 million people – 272 million Europeans, including 20 million Muslims, and 200 million non-European Arabs and Jews. It now seems possible that the Union for the Mediterranean (UfM), the mechanism that French President Nicolas Sarkozy set up in 2008 to increase regional cooperation, may actually step up to the challenge of reclaiming the region’s past as the cradle of reason, tolerance, and humanism. The UfM could offer a model for coexistence to a world injured by dictatorship and fear of Islamic fundamentalism. Rising tensions in Europe over what has ominously crystallized as “the Muslim Question” has made it all too easy to forget that there was a time when Islam – a more tolerant and inclusive civilization than it appears to be in the post-9/11 West – was fully a part of European life. Today, no less than yesterday, Mediterranean people – Muslims, Christians, and Jews –share inescapable geopolitical, demographic, and economic realities. They should remind themselves that demonization, exclusion, and division are not the only options – and should not be the region’s destiny. Among Sarkozy’s main interlocutors at the birth of the UfM in 2008 were Tunisian President Zine El Abidine Ben Ali, and Egyptian President Hosni Mubarak. Now that they are gone, so is their limited and limiting approach to international dialogue, based almost exclusively on state-to-state relations without any significant input from civil society. It is sad to note that European leaders sometimes adopt such narrow positions, too, responding to the short-term demands of electoral politics instead of facing the challenges of long-term strategic thinking. Sarkozy, too, has fallen prey to this trend. Indeed, in February, he declared that multiculturalism was a “failure,” adding, “Our Muslim compatriots should be able to live and practice their religion like anyone else…but it can only be a French Islam, not just an Islam in France.” Sarkozy, of course, did not define what he meant by a “French Islam.” But the comments were widely interpreted as an echo of pronouncements a few days earlier by Jean-Marie Le Pen, the former leader of the far-right National Front party. Cooler heads should look, instead, to Muslim Spain, Al-Andalus, which shone in Europe from the eighth century until the fifteenth century – a fertile period of cultural brilliance that paved the way for the Western Renaissance, as well as an inspiring paradigm of convivencia, or coexistence. Integrating the Mediterranean world into a tolerant community that ensures the peace and prosperity of all its peoples can happen today, because it has happened before. Such an achievement would offer the world a needed alternative to the increasingly questionable model of economic globalization. Looking at Europe from a distance, it is tempting to see a continent receding from the world stage and in conflict with itself and with its past. Yet the reality is more nuanced. Today’s Europe is filled with potential, provided that the Mediterranean region harnesses the forces and wealth implicit in such initiatives as the UfM. Two important features of both the Tunisian and Egyptian revolutions will be significant in assessing the chances for a renewed Mediterranean Union. First, the large and effective use of social media in both countries revealed remarkable technological savvy and creativity among the young. More significantly, it displayed this generation’s unprecedented level of political awareness and activism. Indeed, the test of success of any new Mediterranean structure will be the degree to which it meets the aspirations and scrutiny of this young, politically aware generation throughout the region. For the same reasons, a new Mediterranean union could be a framework for a new moral vibrancy, informed by the same universal values that mobilized the young in Tunisia, Egypt, and beyond – freedom, individual responsibility and accountability, transparency, tolerance, solidarity with the weak and oppressed, justice, gender equality, and other fundamental human and democratic rights. In light of this hopeful trend, how long can Europe’s obsession with Islamic fundamentalism hold sway? How long can the so-called “Muslim Question” be used as a tool to defeat political adversaries? Many young European voters, who may know better, will most likely not look kindly at such opportunistic tactics. Finally, one would hope that the concept of belonging to the same Mediterranean family could bring about new solutions to old conflicts – for example, offering Palestinians and Israelis alike the healing that both peoples desire, but which the dying old Arab order failed to achieve. The great philosophers of the Enlightenment would not hesitate to endorse the moral consciousness expressed in the postings that flooded cyberspace during the Tunisian revolution. Moral secularism at its best was on full display from the rugged streets of Sidi Bouzid to the imposing refinement of Avenue Habib Bourguiba in Tunis. This renewed sense of belonging to the same human family and the same moral universe resonated profoundly with Mediterranean Europeans, who found, in the claims and expectations emerging on the opposite shore, echoes of their own unfulfilled claims and expectations. Mustapha Tlili is a research scholar at New York University, founder and director of the NYU Center for Dialogues, and a member of Human Rights Watch’s advisory committee for the Middle East and North Africa.