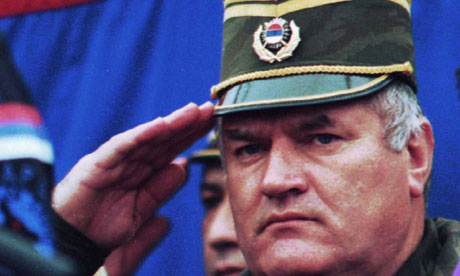 12.28pm: Tadic says he thinks the arrest will clinch his country's entry into the EU.

"I believe that the doors for Serbia to joing the EU are open," he says. Tadic also says it is entirely coincidental that the arrest has coincided with the visit of Lady Ashton, the EU's foreign policy chief, to the country.

12.26pm: "Today we closed one chapter of our recent history that will help us one step closer to reconciliation in the region," says Tadic.

He confirms that the suspect was arrested "on the soil of the republic of Serbia", adding that the arrest shows that the Serbian state has established "the rule of law" when it comes to tracking down alleged war criminals.

12.22pm: The Serbian president, Boris Tadic, is speaking now. He says the arrest of Mladic is the closure of "a very hard chapter in Serbian history".

12.15pm: A bit more from Bob Stewart on Sky on how news of the arrest will go down in the former Yugoslavia:

I hope they will be relieved … but the arrest of Mladic is something that should have happened a long time ago. I'm absolutely delighted and so will all those people who suffered in Bosnia at he hands of this man and all those men under his command.

12.06pm: Mladic was indicted by a UN war crimes tribunal on fifteen charges for his role in the Balkan wars of the 1990s