Central bankers to the rescue?

They can buy a little time, but the real remedy must come from Western politicians 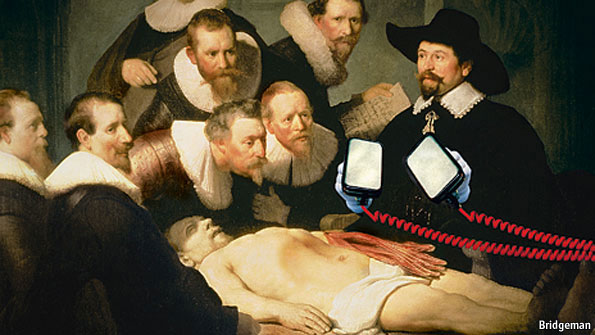 FLAT on its back, feeble and growing weaker, the rich world’s economy is in a sorry state. In the past week the signs of alarm at its condition have multiplied. In Europe yields on Italian and Spanish ten-yearbonds rose above 6%. America fretted at seeing its credit downgraded by one of the big ratings agencies. Around the world, stockmarkets tumbled, with some recording their biggest one-day falls since 2008. Bank shares were hit especially hard, a sign of stress in the financial system. Then the central banks stepped in (see article). The European Central Bank (ECB) let it be known that it would support Spain and Italy by expanding its bond-buying programme. Meanwhile America’s Federal Reserve said it was likely to keep interest rates close to zero at least until mid-2013, and hinted that it might take other steps to support the economy. The Italian and Spanish bond yields fell back. The stockmarket declines paused, if only briefly as worries moved on to France (see article). Even though the emerging economies are still growing strongly enough to maintain global growth, pessimism about Europe and America weighs on the whole world.
That pessimism is obviously rooted in the economic data, particularly from America, which suggest a sluggish recovery at best. But there is also the spectre of political risk. Having basically trusted politicians to sort things out for the past three years, investors have changed their mind. A lousy debt deal in Congress and the euro zone’s inability to confront its problems are not just bad in themselves; they reveal politicians who are either failing to help or are making matters worse. This despair is also affecting business confidence. The latest Economist/FT global business barometer, a survey of managers around the world, shows that those who think conditions will worsen in the next six months outnumber those expecting improvement by 10.5 percentage points, a big reversal from the previous, bullish poll in May. American firms are wary about investing more of their copious cash pile (see Schumpeter). As long as that continues, the central bankers, even if they get things right, can offer only palliative care. Sending for the surgeons The stockmarket declines of recent weeks clearly do nothing for confidence, but nor are they a reason to panic. An adjustment for American equities was perhaps overdue: the S&P 500 had doubled since its low of March 2009, and the market’s cyclically adjusted price/earnings ratio of 20.7 on August 4th was well above its historical average of 16.4. Recoveries after financial busts are slow, as the private sector pays down debt. The bond market long ago recognised that reality. It may have at last sunk in with stockmarkets too. And America’s economy is still showing signs of life: in July it created a net 117,000 jobs—not nearly enough, but not evidence of a recession. Yet the risk of America and other rich-world countries slipping into recession again is real. The root of the problem on both sides of the Atlantic is simple: too much debt, and too little political will to deal with its consequences. That points to where the danger really lies. In the euro zone, the debt woes that started in small peripheral countries have spread to much-bigger Spain, Italy and perhaps even France. As usual, the crisis paused briefly after another emergency summit last month, only to resume with renewed menace when it became clear that the politicians had not done enough, leaving the banking system at risk. In Washington, DC, meanwhile, the squabbling politicians averted a default over the debt ceiling with a deal that is flawed on two counts: it enshrines short-term fiscal contraction when the economy needs a boost, and it fails to reduce the medium-term deficit. Hence the justified downgrade (see article). How much can the central bankers do? In Europe the ECB’s intervention certainly had an effect where it mattered: yields on Spanish and Italian bonds came back down to 5%. Jean-Claude Trichet, the ECB’s president, would be wise to reverse the ill-advised rate rises of earlier this year: inflation in the euro zone has come down and should fall further as commodity prices retreat. But rates are pretty low, and the ECB is reluctant to stray into the fiscal realm with much more government-bond buying. Over at the Fed, Ben Bernanke should consider a third round of “quantitative easing” (buying bonds with newly created money). But the benefits are likely to be limited, and it might complicate life for emerging economies which could face a fresh surge of capital inflows.

Compare world debt levels over time with our updated interactive debt guide
Back to Barack, Angela & Co Above all, there is a moral hazard in central-bank activism. It risks encouraging governments to sit back and let others do the work that they find too difficult themselves. That is both a dangerous abdication of responsibility and a missed opportunity. In America Congress must rouse itself to provide both fiscal support in the short term—extending temporary payroll-tax cuts and unemployment insurance, and investment in infrastructure—and a credible plan to cut the deficit in the medium term through tax reform and tackling entitlements. There are bipartisan plans that do this. Mr Obama and his Republican adversaries have previously opened the door to such a grand bargain. A new deficit-reduction committee presents another opportunity. Cynics say it is naive to expect anything dramatic before the 2012 election; yet it is also naive to expect investors to be fobbed off with lame efforts like the debt-ceiling deal. European leaders will face an ever starker choice between a break-up of the euro zone and a closer fiscal union. Saving the euro will require a far bigger rescue fund than the zone has currently been prepared to accept. A more robust idea from an economic perspective would be the ability to issue Eurobonds collectively backed by all the zone’s members. That would be a huge political decision, not something European voters should see introduced through the back door: but a commitment to do it would provide a clear end to this saga. Again, it is politically hard; but Germany’s Angela Merkel and France’s Nicolas Sarkozy are running out of options. Central bankers can buy the politicians a little time on both sides of the Atlantic. It is up to them to use it.